Truck platooning could save cost, congestion and carbon says the Freight Transport Association, members of which operate more than 200,000 trucks on Britain’s roads. The announcement recently of £8.1 million to fund a trial of platooning will do what is needed to test if such a system is ready for use and can deliver the benefits it promises.

Platooning works by linking a series of trucks travelling along a motorway through the latest driving systems, operators can move large quantities of goods at consistent speeds, lowering fuel consumption and C02 emissions.

But as Christopher Snelling, FTA’s Head of National Policy says, after first announcing the platooning trial in November 2016, it is imperative that government now moves plans forward quickly and efficiently to enable the logistics sector to plan efficiently for the future.

“Platooning could be an innovative means of reducing fuel use so saving costs and reducing carbon and air quality emissions. Driving closely together, platoons of trucks take up less space on the road, and travelling at constant speeds can help improve traffic flows and reduce tailbacks,” says Mr Snelling. “However, the system has to be shown to be safe on the roads and to deliver the promised benefits. The sooner the trial takes place, the sooner the UK logistics industry, which represents 11% of the UK’s non-financial business economy, can know if this will be the right route for the future.

“Technology is the solution to emissions, road safety and managing costs,” concludes Mr Snelling. “Platooning could be a real opportunity to optimise logistics on the road – we need to know if it is the way forward as soon as possible.”

FTA represents all modes of the UK’s freight and logistics sector on behalf of its 16,000 members. The UK remains a leader in logistics at a global level, ranked in the top ten countries in terms of logistics performance, and the sector contributes 11% of the UK’s non-financial business economy. In 2016, 2.54 million people were employed in logistics in the UK, approximately 8% of the UK’s workforce. FTA members operate over 220,000 goods vehicles (half the UK fleet), consign over 90 per cent of the freight moved by rail and 70 per cent of sea and air freight. 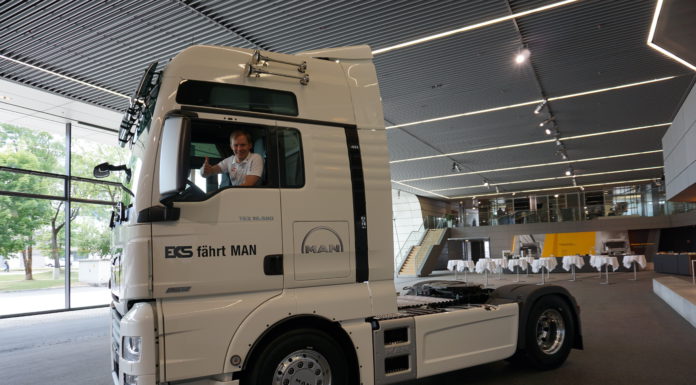 A culture of disobeying road laws

Serco supplies Sani-Booth to counter COVID-19 in the workplace