Scandinavian truck manufacturer Scania wanted to test just how far fuel consumption improvements have come since the early 1990s. The company pitted a 1992 Streamline 143 V8 prime mover against a new generation S 500 straight six; both setup to haul a load of logs across Sweden.

Fuel consumption accounts for a significant portion of running costs for operators, emphasising the importance of focusing on fuel use as a means to keep money in your back pocket.

There’s the financial component, as well as initiatives from both the public and private sectors to reduce carbon emissions for environmental reasons. “Fuel-use per transported ton is currently the most important factor for 4×2 vehicles in European long-haul operations,” says Henrik Wentzel, a senior engineer at Scania.

Since 2004, new Scania trucks have been equipped with a system for monitoring fuel consumption and emissions. The data produced is read during servicing, allowing Scania to monitor progress over the years.

“When we compare vehicles used in more or less the same way, the statistics show that fuel consumption has dropped by 1,3% a year since 2004,” Wentzel says. “At the same time, nitrogen oxide emissions have dropped significantly and constantly sit under the tough compulsory threshold, which is currently 0,4g/kWh.”

“We did it this way (using a straight six) because both vehicles reflect typical timber transporters of their day,” Wentzel says.

The test drives took place at the beginning of February. The 143 was in very good condition, having stood as an exhibit at Scania’s museum in Södertälje prior to the test. During the analysis, each of the vehicles was driven at 85km/h on a stretch of Swedish National Road 73, south of Stockholm.

The trucks carried similar cargo weights, which gave the new vehicle a small advantage as it was lighter overall than the Streamline. “The most important effect of the lower kerb weight of the new vehicle is that it can transport more timber per load,” Wentzel says. “This means fewer journeys and thus lower emissions.”

The drivers – father and son team Johan and Lucas Remmert – were forced to swap between the two vehicles so that the test results wouldn’t be influenced by who was driving. “For me, the biggest difference between the two trucks was the noise levels,” says Lucas. “It was quiet in the cab of the S 500. The gearbox was also extremely quick. The vehicle handles cold starts, eats up the hills and knocks its current competitors out of the park.”

Johan agreed, saying: “Comfort-wise, it’s clear that things have become much better. At the same time, though, I got quite nostalgic about the 143. It was more like real driving. I’d choose it for a Sunday drive.”

The test results turned out to be in line with developments since 2004. In the 24 years between the production of the two trucks, fuel consumption has fallen by about 25% and nitrogen oxide levels by an impressive 95%.

“The results offer confirmation that the improvements that we are gradually introducing produce consistent results over time,” Wentzel says. “That’s the way it is with the development of diesel engines. There’s no revolutionary fix for everything, and instead it’s all about working hard on the details.”

Wentzel points out that engines have become more efficient, as well having greater torque and power for their size. Aerodynamics have been improved, semi-automatic gear boxes reduce fuel consumption, rear axle ratios are lower, auxiliaries have improved, and kerb weights are lower.

“This experiment provided pleasing results,” he says. “Our increased focus on fuel consumption and harmful emissions has yielded good results.” 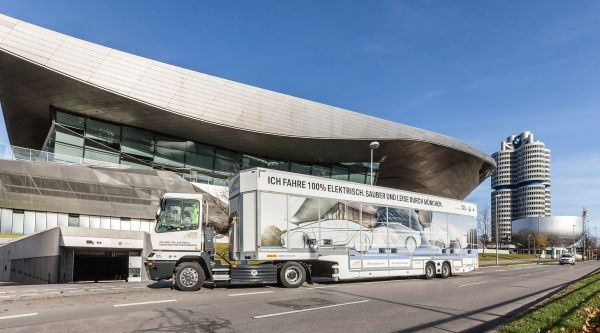